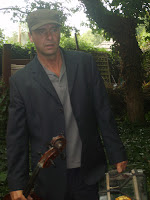 Gosh and golly i've got to apologise for it being two whole weeks since the last blog. Its not that i've been lazy (well maybe a bit), but theres been tings appening honest! But first of all i am going to introduce you to one of the core mummers members (eeuw) - guitarist/writer/producer/ Mr Paul Sandrone - who co-owns studio 12a where we work in brighton. Blessed with a natural gift for a fine chorus this man was born in hooksville, catchywick in a remote suburb of Bristol which was in fact where we first met many moons ago. Since then he has become a fully-fledged brightonian and is more often than not to be found fishing on Shoreham beach with a packed lunch like his mum used to make him. (whilst humming his latest 'sticker tune' to catch the sticklers if course). Recently however mr sandrone has learned to play percussion and drums and is now rather obsessed with hitting as many objects as loud as possible in the studio , as you can hear on (finally!) 'This is heaven'. Check out the military drums in the breakdown - a Sandrone special! Dont worry i am going to post a clip soon as i get it thro but those who've been to the gigs may know what i'm talking about..
Which brings me to live shows and again a big fanx to all who came to Monto in London last thursday. Less shambolic than Komedia and the crowd were yet again lovely; it all ran a bit smoother - with all limbs in place this time!
Love to you all. mwah xx
Posted by The Mummers at 20:22

Damn - I wish I'd known you were playing in London. I'm so in love with the music on your myspace right now. Gah.