So do you remember me saying a while back that i was on the verge of solving my train obsession in one? Well here she is the beauty! 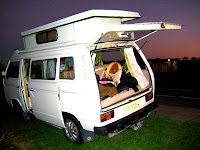 Well yes i know she's a little old and rather shabby (aren't we all) but she can do 70mph down hills honest! ! Anyway i took her down to Shoreham beach the other day cos we were doing a photo shoot down there and it was such a beautiful day - cold but warm in the sun, and it was most handy to have my travelling boudoir with me! I have to say that Shoreham beach is my new favourite place, and even good for a little impromptu rehearsal! There was no-one around all day, the sea was glorious and we sat and drank tea watching the sun go down, leaning against the rows of empty white beach-huts; the feint outline of Brighton in the distance looked like Hong Kong in comparison to this huge deserted expanse of stony beach.........o yes and then i had to drive back to london in the dark overshooting the garage and nearly running out of petrol panicking like a crazed fool, praying to a god i really believed in whilst doing 45 uphill with horrid mean (mainly) male drivers blasting their horns at me in their equally horrid shiny FAST cars.

Meanwhile starting rehearsing again next week for a slightly different version of The Mummers.. all will be revealed later! Till then! x 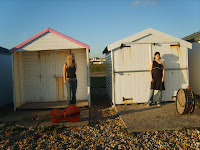 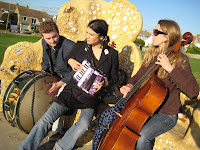